The Tutorial Mode is accessible to players or guests without any license or access card. Each tutorial, or trial play lasts for 10 minutes.

On the login screen, select the “チュ一トリアル開始” (Start Tutorial) button at the bottom-left corner. 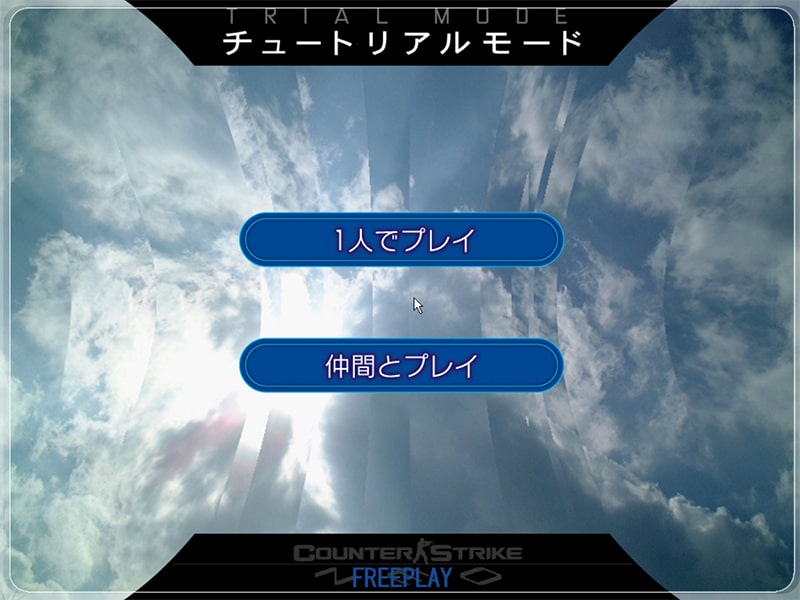 The player is briefed through the basic keyboard and mouse movements. Eventually the remainder of the tutorial is spent on practising against two (2) AI-controlled players. The trial ends once the timer expires. Alternatively, bring down the console with the ALT+F7 keys, type “disconnect” (without quotes) in the console then hit ENTER.

Host and/ or invite players to a dedicated game server.

On the main menu, click on “チームバトル” (Team Battle).

Rooms can be configured to accommodate 3V3, 4V4 and 5V5 battles, toggle spectator and friendly fire, refuse challengers (other players), and use default character models. 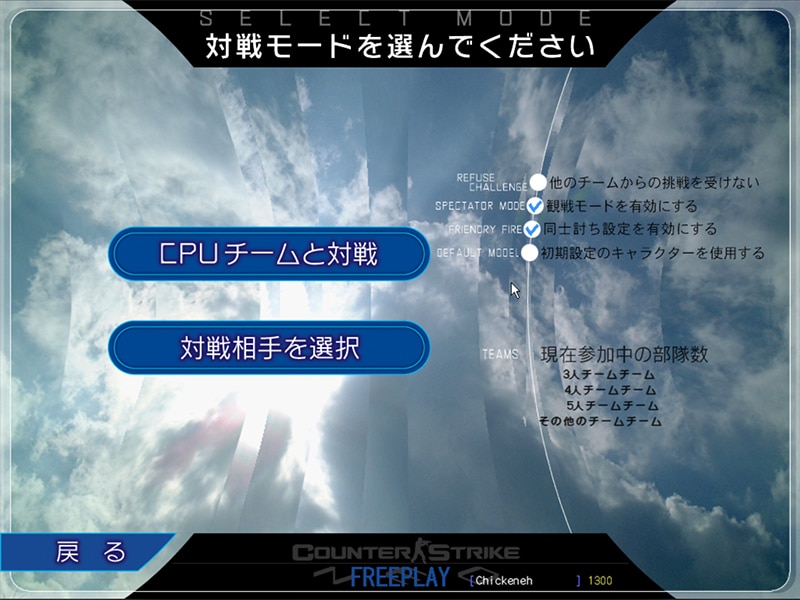 Without Namco servers for the Select Opponent mode, choose the “CPU チームと対戦” (Play with CPU) button, and any map. On the next screen, simply choose a team then click on the “部隊として対戦” (Play as a Unit) to start. 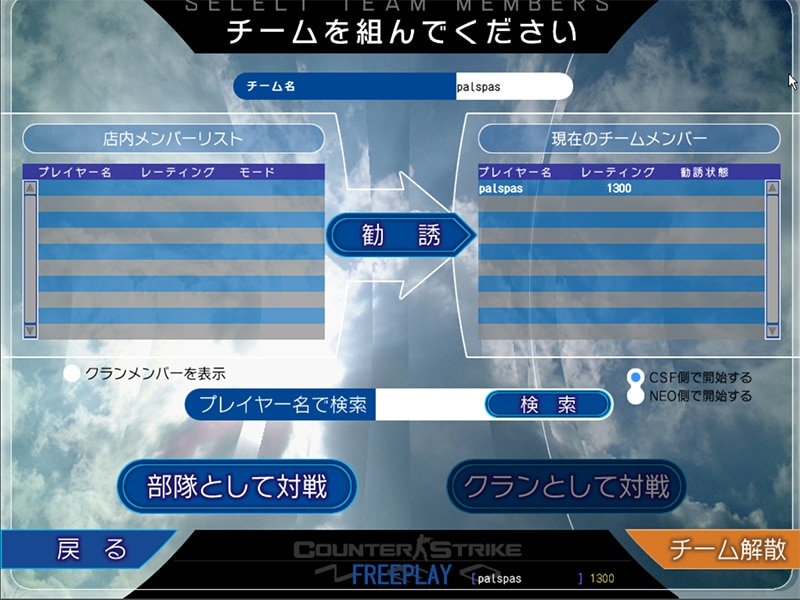 Since Neo is built on the Counter-Strike: Condition Zero game engine, both support the standard bot commands, including bot_add_t, bot_add_ct, bot_kill, and such.

Special Missions/ Mission Mode is a separate challenge to test the reflex and shooting skills of the player(s).

Depending on the map, they can be played either alone or with 3 other players (only available on Namco official servers). Take note that the enemy bots have no respawn limits so they will keep coming.

The mission objective is pretty straightforward. On the CSF (Terrorist) side, detonate the C4 (bomb) at one (1) of the two (2) designated bomb sites on the map. On the NEO (Counter-Terrorist) side, defuse the bomb that has been planted by the enemy. 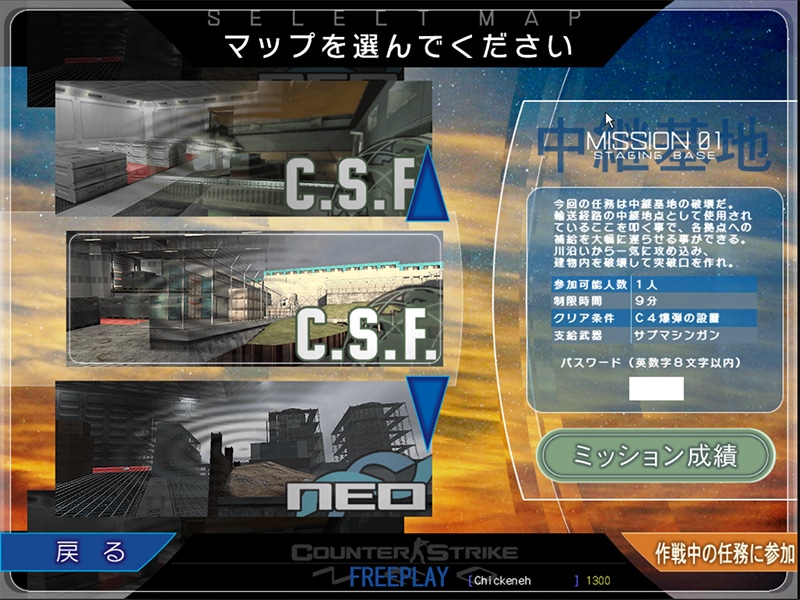 The game ends once the player dies or the objective fails/ succeeds.

While there are no buy menus, several primary weapons are available near the spawn point. 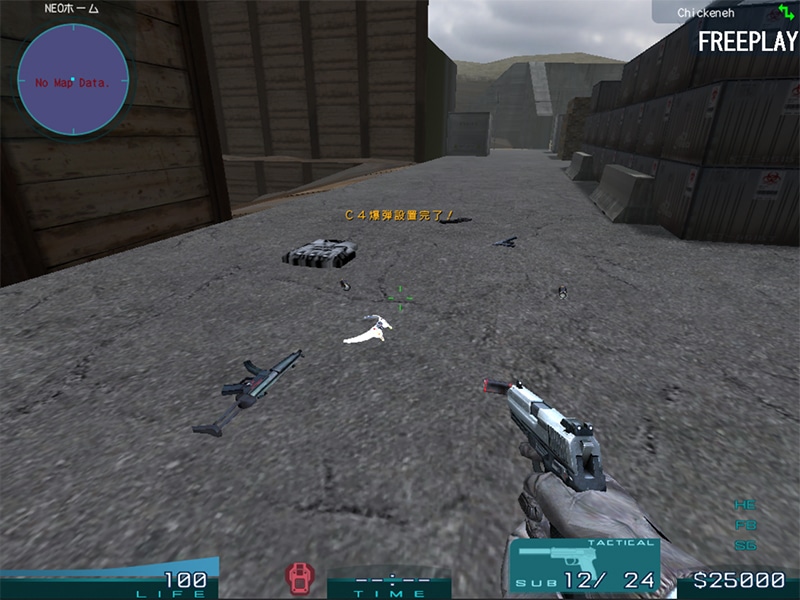 In addition to completing the mission before the time runs out, the game mode serves as a battle between speedrunners. The time attack leaderboard can be compared on the 1,2, 3 and 4-person categories.

Improve your shooting skills with the AI-controlled players before joining the real matches.

The Training section is accessed by clicking on “トレーニングモード (Training Mode) button the on the main menu.

The player trains against a single AI-controlled player (Bot) on the available maps for a total of 14 rounds. On the 7th round, both teams are swapped. The game ends after the 14th round with a brief summary. 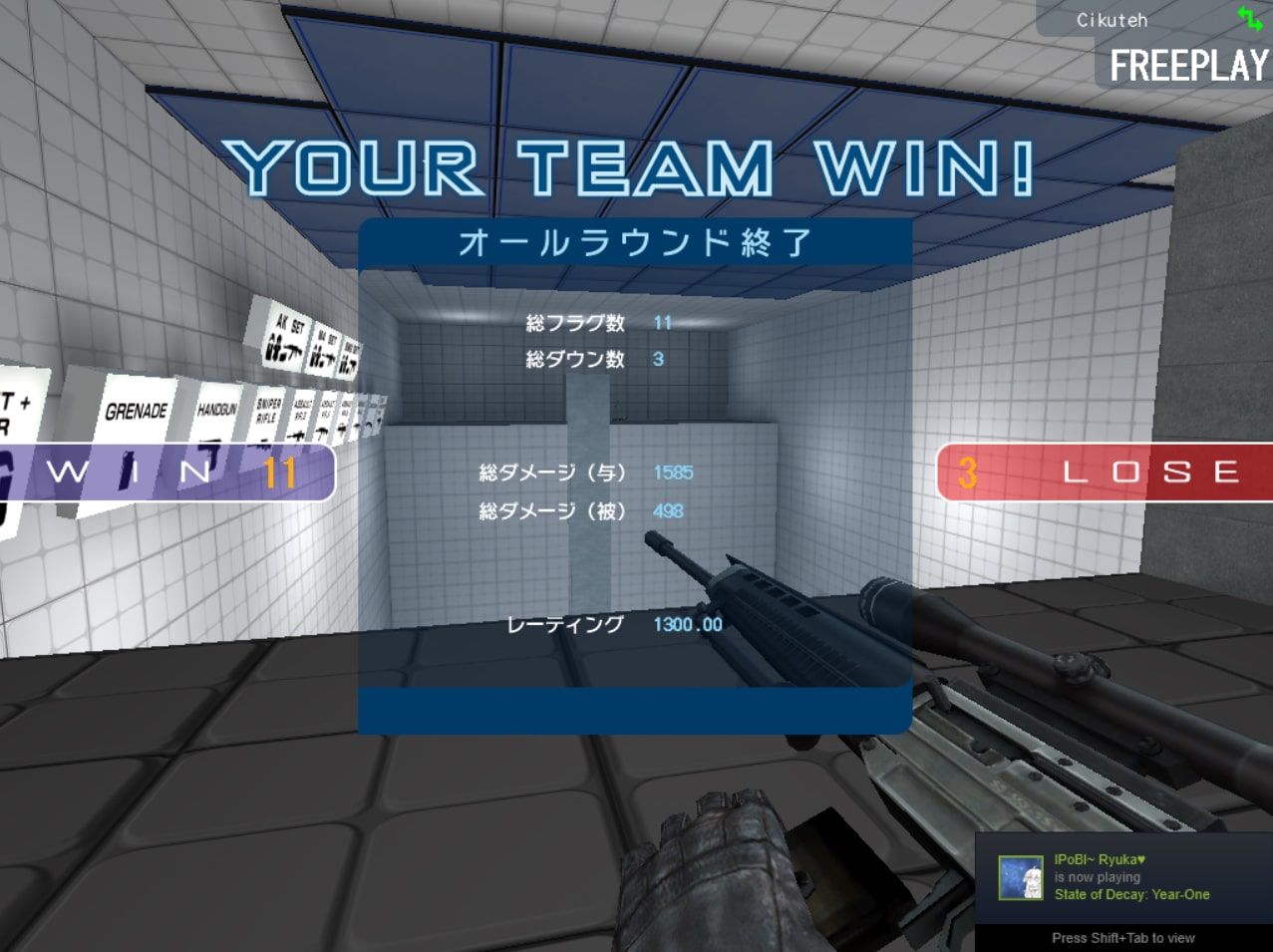 To access the training/ room settings, press ESC, followed by F4. Bot behaviors, starting money and the number of bots per faction are adjusted here. 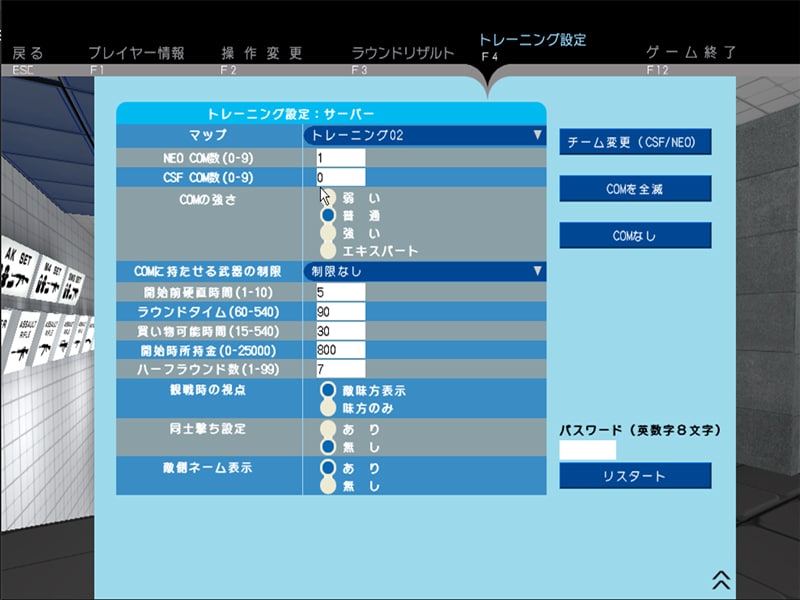 Training is playable with bots and online players (the built-in feature is only available on official Namco servers).

Configure both mouse and key binds and characters here. On the main menu, click on “オプシヨン” (Options). 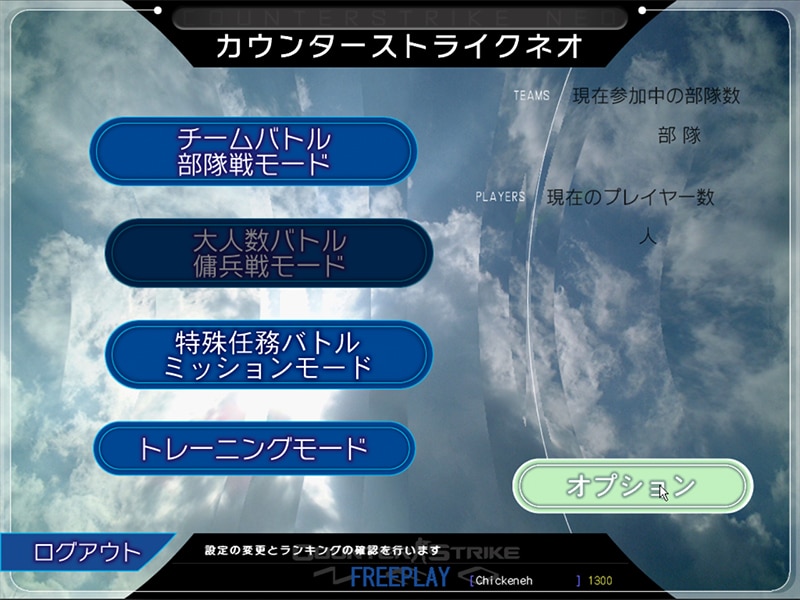 To configure the control, click on “操作設定” (Operation Settings). This screen displays all key binds, an extensive range of controls, mouse sensitivity, crosshair and some gameplay settings. 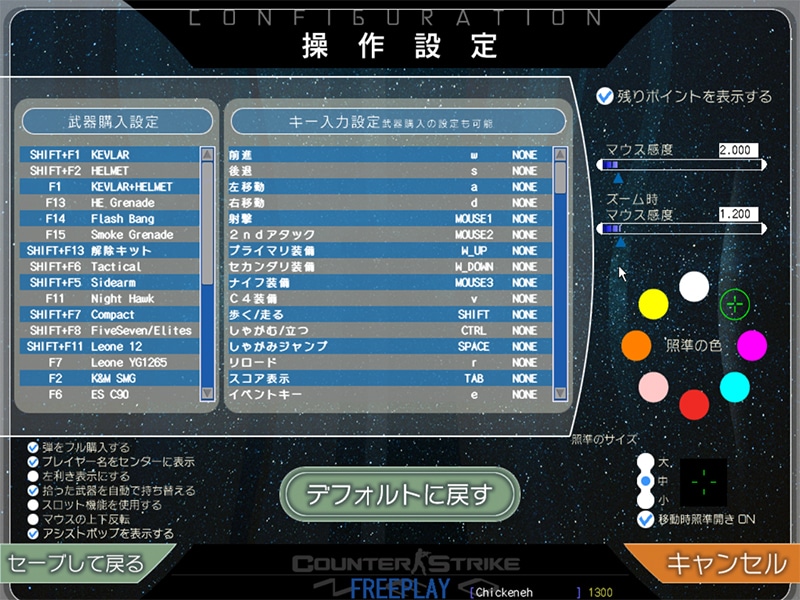 To configure the character, click on “キャラクター設定” (Character Settings). Unfortunately, this build is only limited to both male and female characters on both NEO and CSF faction. 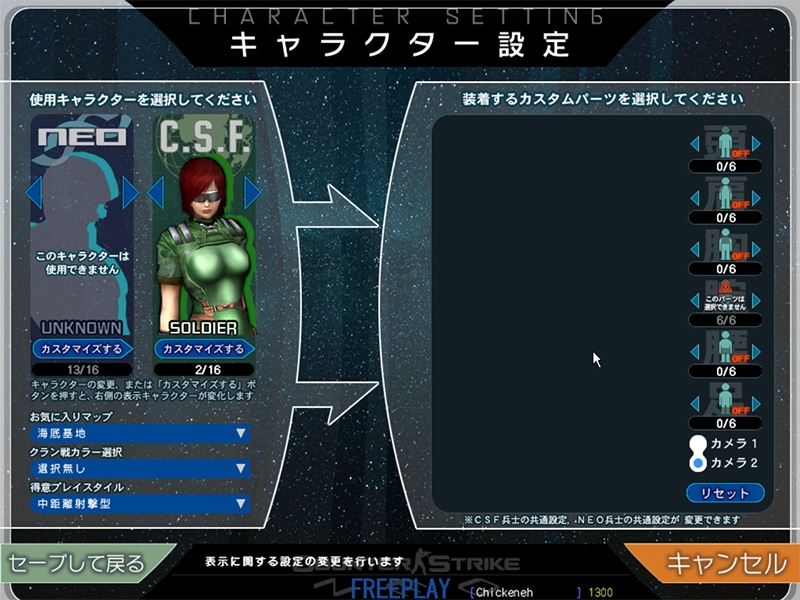 This site and its related channels do not officially represent the aforementioned companies in any way, including the publisher(s) of related software.